AS SEEN in GOLF AFICIONADO by Rob Spellman 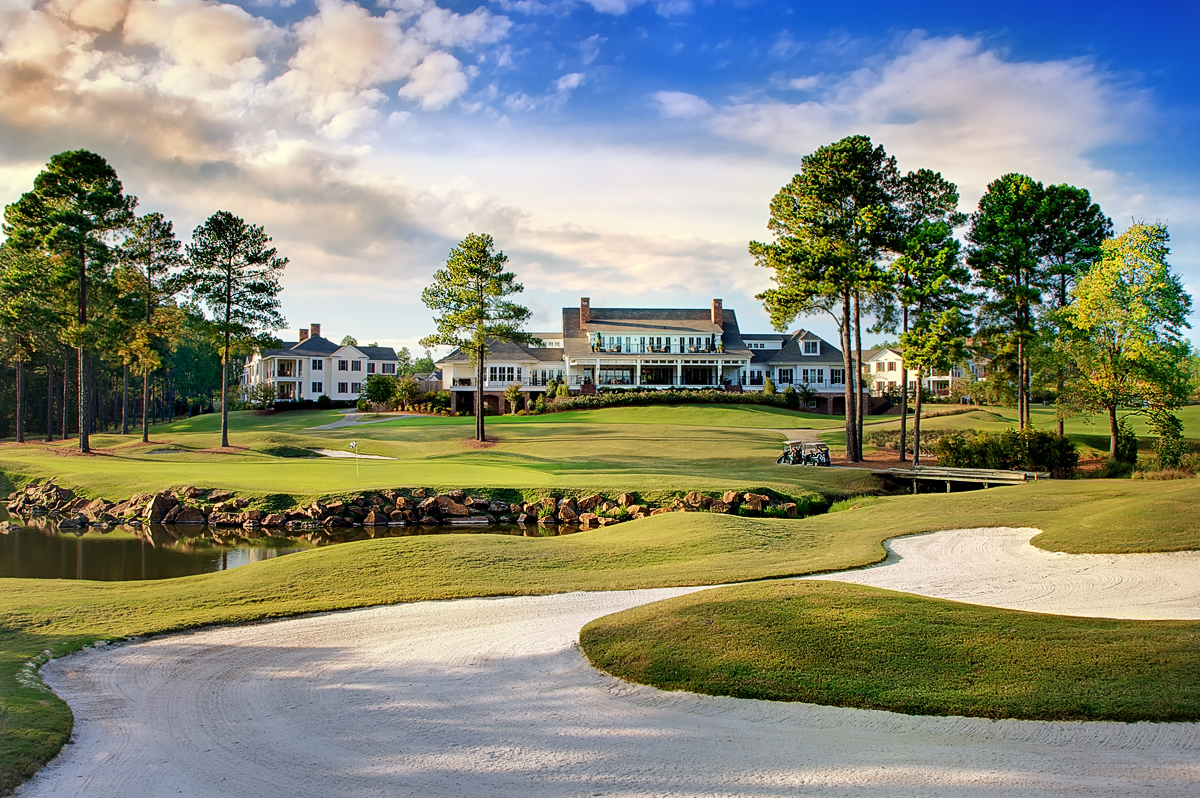 In my last article, I expressed the right way to do Pinehurst, the Talamore Way.  However, even if you choose to stay somewhere else during your visit to Pinehurst you’ll want to check out Talamore’s Mid South course.  After spending four days in a row on Mid South as my daughter’s caddy during the 2018 Teen World Championships, I fell in love with the course.  In fact, when we left town it felt like breaking up with a girlfriend, and boy she was a hottie!  Mid South is an Arnold Palmer design still fresh off a complete renovation in 2017.

Mid South was only 25 years young when Talamore decided it was time to renovate.  The renovation was managed in-house and the team at Talamore did an amazing job.  Having walked every inch of the course I can tell you they didn’t leave a stone unturned.  The course is in meticulous condition and the greens are back to their original size when the course opened in 1993.  The Pinehurst area used to be known for bentgrass greens, a favorite among many golfers, but extremely temperamental in warmer climates.  North Carolina’s climate has always been on the borderline for being able to support bentgrass, and as the temperatures seem to get warmer every summer it has become nearly impossible for the area to continue using bentgrass.  Even nearby Pinehurst No. 2 moved away from bentgrass and converted from bentgrass to champion bermudagrass.  The bermudagrass is tough as nails and allows for the best possible conditions year round.

Along with the greens, several bunkers were either redone or removed altogether.  As with many courses a layout that was perfect 25 years ago needs to be adjusted to accommodate today’s modern equipment.  However, the new course layout flows perfectly, if you had never played the course you wouldn’t realize any changes had been made to the original design.  When playing Mid South you get the benefits of a mature landscape but with conditions that feel only a few months old.

Having played a lot of Arnold Palmer designs over the years, typically resort style courses on the easier side.  Mid South is no walk in the park, it’s a tough test of your golfing ability.  A par 71 layout that plays 7,000 yards from the back tees, with the rolling hills and changes in elevation it plays an extra two hundred yards longer from any tee, so be sure to take that into account when picking which tees to play from. 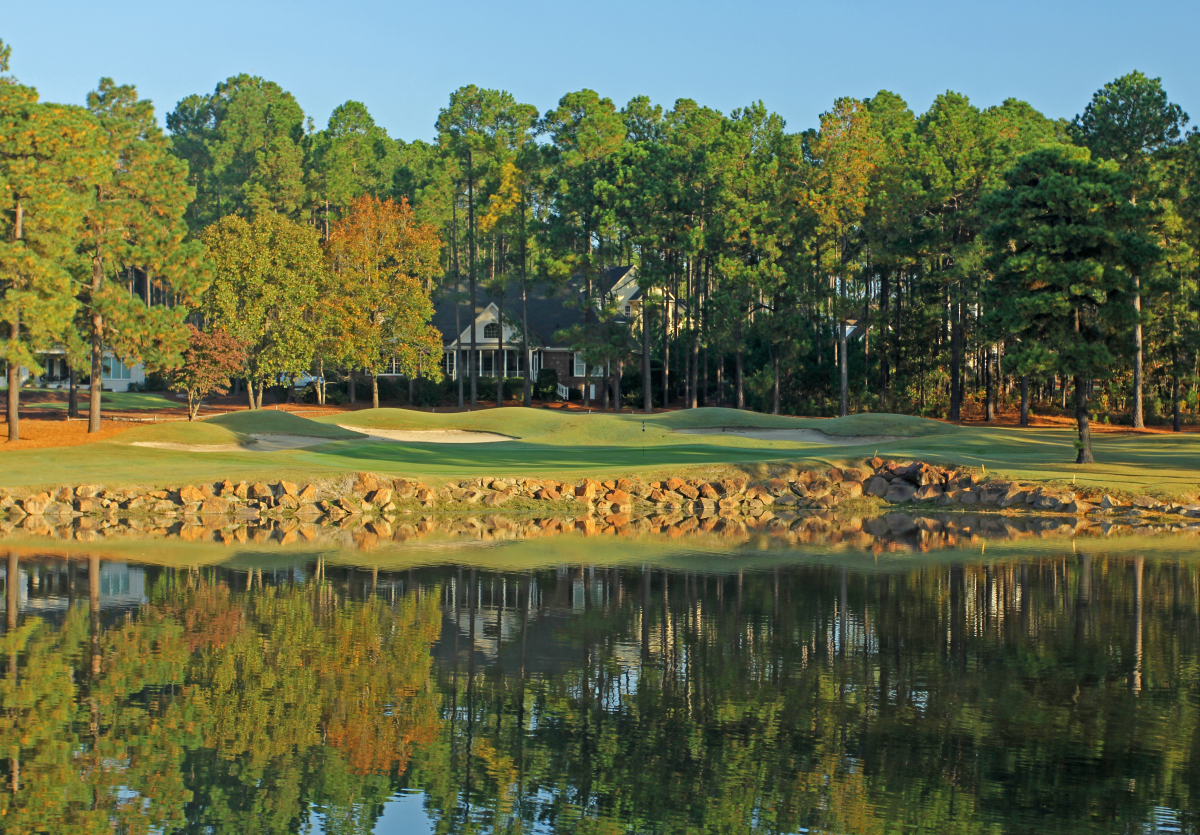 The water will stand out more than everything else on Mid South, manmade lakes often come into play and are typically presented in a dramatic fashion.  This couldn’t be more evident than on the 6th, a long par 3 that requires a precise shot over the lake.  The best advice for this hole is to aim for the center of the green, the slope of the green and the danger from the water leads most players to take an extra club.  However, the bunkers behind the green make being long extremely difficult.  Feel confident in your club selection, and go for the middle of the green, regardless of pin position you’ll at least give yourself a chance at birdie.  Otherwise, you’ll probably find yourself in the drop zone or taking an extremely difficult shot out of the bunker, which will be nearly impossible if the pin is located on the back of the green.

The 9th and 18th are two holes that leave you with a lasting impression.  These holes share a massive green that sits along the back of the clubhouse and provides a dramatic finish to both the front and back nine.  Throw in the fact that both are Par 5s and birdie is in play from every tee box, both holes provide memorable finishes, where a player can go low or completely blow up.  The Teen World Championship had golfers going off both the 1st and 10th throughout the tournament but no matter which tee you started on, you knew there was going to be drama on the last. 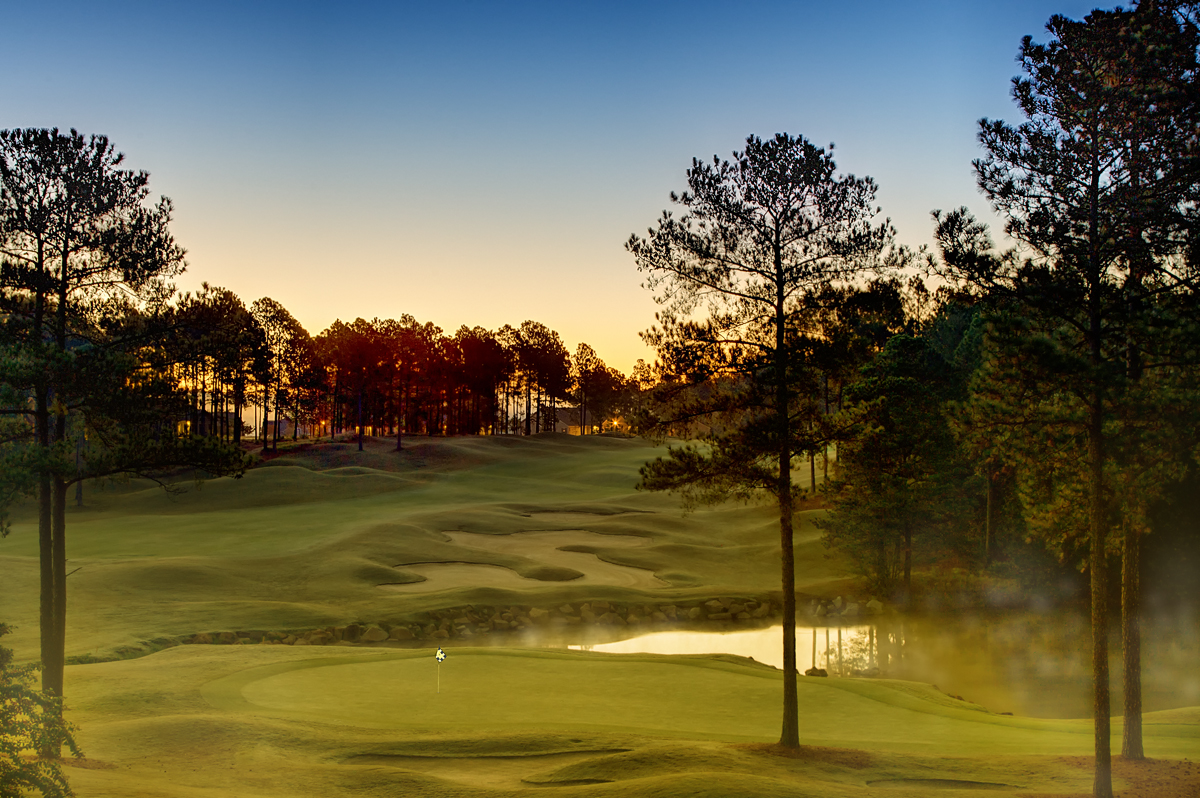 The 18th is cut out along a steep hillside and is one of the toughest finishing holes you will ever play. During the 2018 Teen World Championship, more penalties were taken on this hole than any other two combined on the course.  Playing this hole for the first time is extremely tough until you’ve played the hole, it’s hard to realize how difficult of a 2nd shot you’ll have.  From the tee, you have water on the right and I saw several tee shots end up wet.  On this hole, everything slopes down the hillside towards the water.  On the left you have the hillside and rough, we ended up on the hillside every day which provides plenty of safety from the water but left us with a tough second shot that’s basically blind and drops off towards the water.

Like a tilted table the 18th fairway tilts down towards the water, having a shot at the large shared green in 2 will be dependent on a well-placed tee shot.

The first time we played 18, my daughter was extremely lucky to keep her 2nd shot dry.  Straddling the hillside makes going for the green in two impossible, so we were looking to punch out of the rough and leave about 115 yards into the green.  We were shocked as the ball ping-ponged off the hillside and rolled out to within a few feet of the lake.  With less than a 100 yards left she stuck her approach shot and ended up 2 putting for par.  On the final day of the tournament, we weren’t as lucky as the 2nd shot ended up making the water and so did the next one.  Love it or hate it, the 18th is going to leave you with a lasting impression, and a great story to tell.

Mid South’s 4.7 rating is one of the highest we’ve recorded, the course was in spectacular condition for the tournament and scored well across all categories of the Golf Aficionado rating system.  The course doesn’t have a weakness, you’ll be challenged at every turn and when you finish with your round several holes are going to stand out in your memory.  Mid South is a true test of your golf game and is by far the best Arnold Palmer design we’ve played, we’re sure “The King” would be proud of the recent renovation.  When you hear people talking about Pinehurst don’t be fooled, ask them if they’ve played Mid South.  Mid South is a world-class golf course that can stand toe to toe with any course in the country let alone Pinehurst.  If you’re looking for a great place to stay in Pinehurst that won’t break the bank, check out my article on Talamore Resort.

To book your stay and play at Talamore Golf Resort and Mid South visit their website or give Nikki a call at (800) 552-6292!