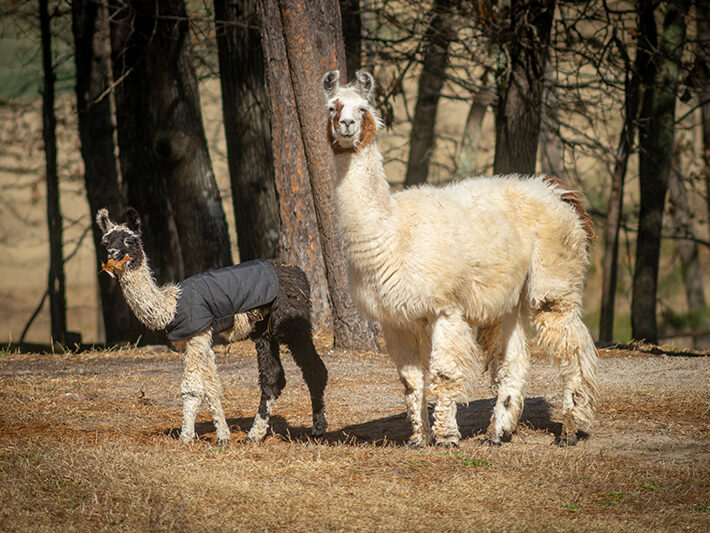 Talamore Resort debuted in 1991. And while the opening of the magnificent Rees Jones design was highly anticipated from the Village of Pinehurst all the way across the Sandhills, it was the resort’s lovable llama caddies that helped put Talamore on the map.

As was the case with many other golf courses at the time, the Jones-designed Talamore was built as an amenity to sell real estate. But the resort’s ownership recognized the event’s tremendous marketing potential and weren’t afraid to try new things.

In the 1970s, there had been a resort in Mexico that took a donkey out as a caddie with two golf bags on it, and Golf Digest ran a two-page spread. The Talamore owner was a teenager at the time and that idea burned in his memory as something that he was going to do if he ever got into the golf business. 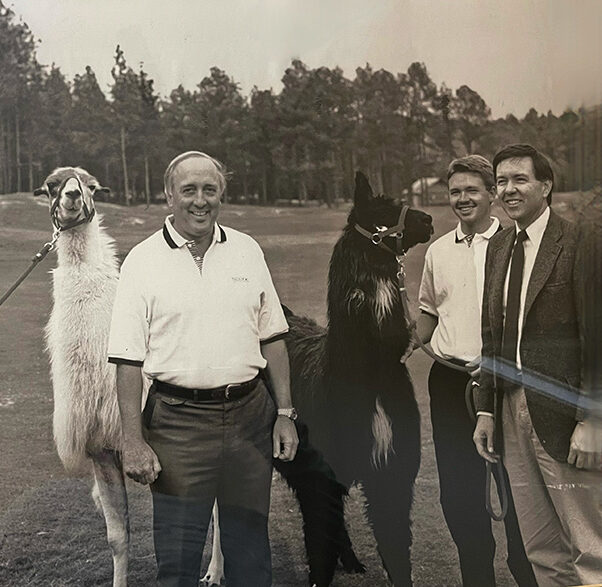 Rees Jones pictured with the Talamore Llamas in 1991.

When Talamore opened, he pitched the idea of donkey caddies as a way to generate national publicity and separate the club from others in a crowded market. However, an expert in the livestock business educated him on pack animals and told him that the best animal for that kind of job was a llama. Llamas are pack animals, so they have to live together or they don’t even want to eat.

“As goofy as the idea sounded, it worked,” said golf writer Steve Eubanks. “The first week Talamore Golf Club was open, an Associated Press writer played with a llama caddie and wrote a story about the experience that ran in 300 newspapers. The estimated value of the publicity was close to $3 million. Golf Digest picked up the story and just like that a course that would have had trouble separating itself was known worldwide.”

Eventually, more than 5,000 articles were written and published all over the globe. Suffice it to say, the Talamore llamas helped put the club on the international golfing map.

Today, more than 30 years since the time they arrived at Talamore, the llamas are still a proud part of resort life, stabled between the No. 13 green and No. 14 tee. While they walk about regularly and will always be a part of the Talamore brand, they have also been known to be something of a distraction, as golfers regularly want to have their pictures taken with the resort mascot and social media influencers visit Talamore from all over to meet the famous llamas.

The outline of a llama with a flagstick emanating from the center comprises the club’s logo. “That logo was once presented in the yellow and green colors similar to those of the famous Augusta National Golf Club mark, and the club received a cease-and-desist letter from Augusta’s attorneys warning Talamore that its logo was too similar to Augusta’s,” wrote Lee Pace. “That letter is proudly and humorously displayed in the golf shop at Talamore.”

“Everyone knows our llama logo,” says director of golf Tag Leon. “We still use it — just not in green and yellow. We were not going to do battle with (Augusta National). But it’s a cool image. We’ve sold a lot of merchandise with the llama over the years.”

In December 2021, the resort received an early Christmas present — the arrival of a 35-pound baby llama named “Jones,” in honor of golf course architect Rees Jones, Talamore’s original architect. The baby’s birth was even streamed live Talamore’s “llama cam” on WRAL, which was put in place in partnership with the Pinehurst, Southern Pines, Aberdeen CVB.

So, if you’re looking for another reason for a Village of Pinehurst golf vacation, buddy golf trip to visit some of North Carolina’s best golf, you have yet another reason. Come visit some of golf’s most famous “caddies” — at least, the four-legged variety — at Talamore Golf Resort, in the Home of American Golf.